I bought my Golden Universal Tarot deck a few years ago now, and this deck is one of the most beautiful tarot decks I own ( I have loads!). I  use it often. I recommend it as one of the best tarot decks for beginners too! Here’s an honest review detailing why I give it 10/10 as a tarot deck for beginners, and those who are experienced too.

A very boring place to start but hey, this is a detailed review. The Golden Universal Tarot deck comes in a cardboard box that’s standard size. It’s beautifully illustrated with the Empress major arcana image on the front. The box itself is sturdy I have had mine for a few years and it’s still in good condition. The back of the box also has a picture of the Magician image on. The whole box is of course ‘golden’ and gold in colour very pretty. 10/10 for the package.

Inside The Universal Golden Tarot Box:

Inside you’ll find a  guide book which I personally feel is very handy, due to the content and why I would recommend this tarot deck as one of the best tarot decks for beginners. The guide contains a brief history on the tarot and how it came about. Details on the card means- briefly and it’s all in a number of languages English, Italian, Spanish, French and Dutch. Which make the Golden Universal Tarot deck a good deck for beginners as it can appeal widely to those from non-English speaking countries. For those that are a bit more advanced, the info on the card meanings may be a bit too general. That said it’s good to have it there. Note that there is no info on card meanings in reverse for those who want more advanced details. 8/10 for the guide book as it is great for beginners and in a number of languages. 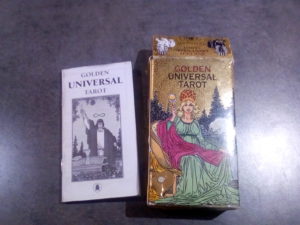 Overall, the quality of the Golden Universal Tarot deck cards is rather good! like I said, I have had my deck for a few years and they have not bent out of shape, and the corners are not tatty. The cards themselves are compared to some other decks I have, are a bit thinner and the stock thickness of the card is not as thick. That said the cards are hard wearing from my regular use with clients and on my YouTube channel. 10/10 for quality as this deck has really been put through it’s paces and held up!

Tarot Card Design On The Back:

The back of the Golden Universal Tarot Deck cards are a really pretty black and gold design. The only thing is for those who don’t like to read reverse cards ( I do), there is no way to tell if a card is reversed when face down, as the design is the same in reverse or not.  For me the lack of telling if a card is reversed or not is not a problem, as I can read them in a spread’s energy, therefore I won’t not mark the deck down for this. I feel the back is a very pretty design, goes well with the ‘golden’ theme and I’d give it 10/10.

This is my favourite aspect, ohhhhhhhhh this deck is just toooooooooo pretty!!! Here are eight different cards I really love.  Top left to right ,The Ten of Cups, The Star, The Empress, The World, The Tower, The Sun, Two of Cups and the Death card. 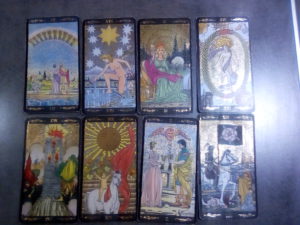 The designs are 100% inline with the traditional images we are used to seeing in the tarot. For this reason this is one of the best tarot decks for beginners as it’s true to form. A lot of decks can deviate or the illustrators put their own spin on things, not with the Golden Universal Tarot. Each card, each suit is true to tradition which makes it great for those who really resonate with Rider Waite images. 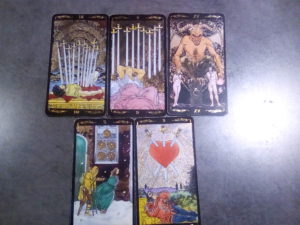 Secondly, even though the images are traditional and every tarot reader no matter their experience, if you are familiar or learned the Rider Waite system you will have no problems with this deck, the beauty is that the cards have very clear, clean drawings. The golden effect just adds to the beauty of the deck. Even more serious cards such as the Tower, the Devil, Ten of Swords, Nine of Swords, Five of Pentacles and the Three of Swords all radiate beauty, with their energies that traditionally indicate some struggles, loss, challenge or stresses in life.

What I also like about this deck is that the names of the cards are NOT on them, so it helps you to really learn the tarot and resonate with the images. The numbers of the cards are roman numerals also. 10/10 for illustrations and designs.

Ease Of Use and Shuffling

Perfect! The cards are a great size pretty standard. They do not stuck together or slide out of your hands as the backs and fronts are not overly glossy. The Golden Universal Tarot is a pretty matte finish to it even with the golden effect. This makes handling them, shuffling, spreading them out, picking them up etc very easy. No complaints in my regular use. Those with small hands will be able to handle them well too. 10/10 for ease of use, the matte finish and shuffling.

10/10 an excellent investment for any tarot card deck collector or lover of the tarot. For beginners a very good investment too due to the images, guidebook, and the fact that this deck is very much inline with Rider Waite images, if this is what you have originally studied. You will be able to read with ease. The price itself at the time of this review under  $20.00, £20.00  is a bargain!

This is really an outstanding deck, so glad that I bought it myself and from using it a good few times a week over the last view years, I recommend it highly to all tarot deck collectors or tarot readers or for anyone who has an interest in tarot and yes of course as a gift! It is very hard to know what decks are good to purchase which is why I do offer reviews to help others. This deck honestly is for everyone there is no really target group or market I feel, it’s a welcome addition for any collector young, old, experienced or a beginner.  And I would go as far to say that this deck is a must have. It’s a deck you can grow with and one that you can resonate with a lot if you enjoy Rider Wait imagery. 10/10 overall from me.

Do you own this deck? Leave me a comment what’s your experience of working with it I’d love to know.

Grab a deck on Amazon below!